Blueprints, Creating Variables in C++ For Use In BP

Here is how you create a property in a c++ base class,

so that it can be accessed in the blueprinted version of your base class that you see in the Editor!

Let's say you have a blueprinted player controller class,

and you want to add a variable: PlayerMusicSkillLevel

This is a variable that other project members want to be able to read and write to from blueprints! 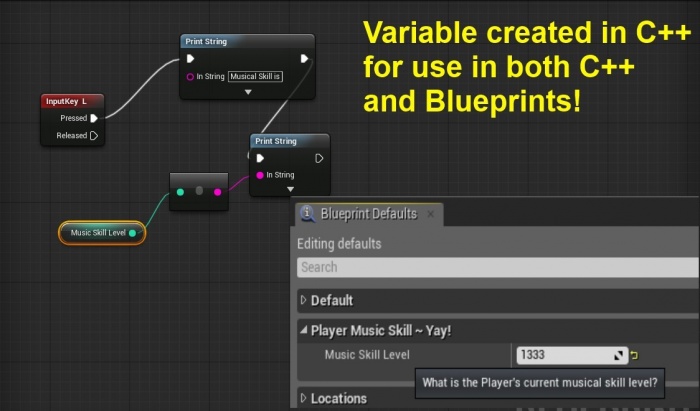 Why Create a Variable in C++ When It Is Used in BP?

To easily have access to variables in both C++ and blueprints, the variables should be created in the C++ base class, which is then blueprinted.

Then both the C++ programmers and the blueprint programmers can access the variable data any time!

Comments that you write as shown will be very neatly and wonderfully shown when the user hovers the mouse over the variable name in the Editor!

If you want team members to be able to access and edit a C++ variable, but only prior to runtime, use EditDefaultsOnly

If you do not ever want a variable to be modified via blueprints, but it should be easily read from, use BlueprintReadOnly.

This is important if a variable is part of a system, and a function should be used to modify the variable.

For example, if the blueprint user wants to increase the MusicSkillLevel,

but in the game, the player can only increase their MusicSkillLevel under certain conditions that are only checked in C++,

then you do not want the blueprint user to just directly increment the MusicSkillLevel,

and they should instead use your C++ function IncreaseMusicSkillLevel().

If you want a value to be visible in blueprint default properties, but not editable,

If you use quotation marks you can create fancier category names!

Now you know how to enable both C++ and Blueprints to access custom variable data specific to your project!