In this tutorial I will show you how you can modify the Shooter Game sample from the Marketplace to allow toggling between first and third person views. The approach I will be using will be focused on sticking as much as possible to the original behaviour. By this I mean that I am not going to erase the use of a first person mesh when in first person view, but rather still keep its advantage and add a way to use the third person model and features only when needed.

In the tutorial I describe how I understood the code to tell you what it does and based on what. That's why it's not a quick short tutorial. If I have misunderstood something please do not hesitate to let me know. 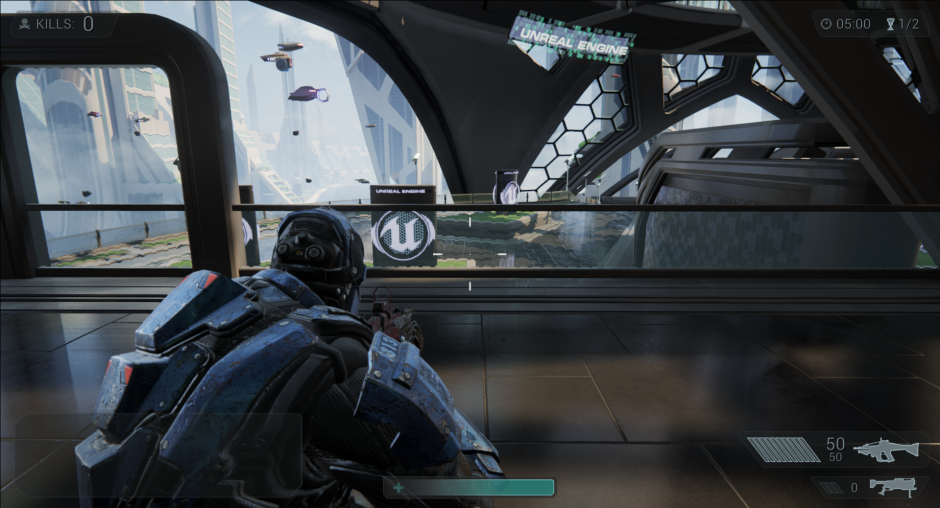 Third Person View in the Shooter Game sample from the Marketplace

The main purpose of this tutorial is of course to show you how to upgrade the original code to add third person view. However I will try to explain everything I did and how I found out it had to be done so that you can understand what you do instead of just copy-pasting the code.
The code sections won't include the methods names if they have been exposed in the description above them, so that you have to read them to know what to do. However I've marked the most relevant information in bold whenever applicable.

For this tutorial you will need to download the Shooter Game sample from the Marketplace and create a project with it.

So to get started - and if you haven't already - you should first run the sample to see how everything behaves.

When alive you can see your character arms and weapon. If you look down you won't see any legs. That's because a special first person mesh has been given to the local player. As the local player is always in first person view you could think that the code has been written in that direction as well. And it has for some parts of it but fortunately not all. We'll get back on this later.

It's interesting to see what happens when you die. The camera stops moving and you can see a third person ragdoll fall to the floor. This means that at this point the game switches between first person and third person views.

That is what got me started.

Digging the grave (into the death code)

From that point I searched for the handling of player death. Having a look at ShooterCharacter.cpp you will quickly find the OnDeath method which is called upon player death. Inside of that method you will notice the following commented piece of code (On line 341):

The IsFirstPerson() method defines the camera view state. If you have a look at its implementation you can see that it:

This is good enough for the purpose of the game as it is but you can see that it doesn't really talk about first or third person. It just assumes that local players will always be in first person unless they are dead (hence the third person switch on death). So next we're going to start by adding support for third person.

Here's what we're going to do for this purpose:

Find the section of ShooterCharacter.h where the other flags are defined (e.g. below bWantsToFire) and add a new boolean flag for third person toggle:

Next find the definition of SetRunning because we will be using a similar approach here. Below it add a definition for SetThirdPerson. This function will be responsible for actually toggling the camera view mode.

We'll need one last definition in the header file. At the very bottom of the code you'll see ServerSetRunning. Again we'll add a relatively similar method below it:

Let's head to the code and add the implementation for our methods. Under UpdateRunSounds which is a good place for our purpose add the base code for the SetThirdPerson method (which will be similar to SetRunning):

Then similarily add the server validation and implementation:

Alright this will take care of updating our flag. However we saw earlier that UpdatePawnMeshes is the method that toggles the visibility of the mesh to use. We should then call it from SetThirdPerson to make sure that our first person mesh gets hidden and our third person mesh becomes visible when using third person (and vice versa). Simply add a call to UpdatePawnMeshes(); at the bottom of SetThirdPerson:

Good. But still UpdatePawnMeshes relies on IsFirstPerson() to determine which mesh to show or hide. We thus still need to update it so it uses our flag to determine the camera view mode. Head to IsFirstPerson() and in addition to testing whether the player is alive and local, also check if the third person flag is not set:

Oh and last but not least lets not forget to initialize our flag in the constructor. Below bWantsToFire = false; do the same with our flag:

This section will be pretty straightforward as it is assumed that you know how to add inputs to trigger some action. In ShooterCharacter.h below OnStopRunning add the following input declarations:

In the code file ShooterCharacter.cpp add the third person inputs implementations below IsRunning:

Finally lets edit Config/DefaultInput.ini to bind some default keys to those actions:

You'll thus be able to toggle third person with G or press and release F to switch to/from third person.

Taking a step back

Alright now we have a functional logic to toggle third person. So let's see what we get when running this code. Well you will actually notice a few problems:

We'll start by taking care of the weapon.

If you look at the code in ShooterWeapon.cpp you'll see that it also defines two meshes (one for 1st person and one for 3rd person) and that pretty much everywhere both of those are used in a rather generic manner so that you won't have to change much. For example:

However it doesn't snap to the player when in third person. The reason for that is simple: it's still the first person weapon mesh that is displayed in third person. And that last comment I quoted should set you on the correct path to handling this issue. You just need to swap model visibilities when switching between camera view modes just like it is done for the player model.

Let's define a new method in the ShooterWeapon header file that will be responsible for switching mesh visibility (below IsAttachedToPawn is fine):

Now we need to call that method when we switch between camera view modes. So let's go back to ShooterCharacter.cpp and update UpdatePawnMeshes. We'll simply update the meshes visibility for the current weapon, if any:

Now if you run this you will notice a little problem when switching weapon. The second weapon will not use that code we just wrote. Well that's because when it is created and added to the inventory it will use the first person mesh and since we only change the visibilities when we toggle the camera view mode it won't affect that other weapon at the time we equip it.

To fix that we can simply have a look at AShooterWeapon.OnEquip. At the bottom of the code you'll see that there is a check for locally controlled pawns. That is perfect for us to call our method. So add a call to UpdateMeshes(); directly below the call to PlayerWeaponSound.

Now you could be tempted to think that this section will be the easiest. Well if you know how the engine works with the cameras you will probably have guessed that we're going to use a UCameraComponent to customize the third person view.

For those of you who (like me before making this) do not know how the engine handles the local player view location and rotation here's what you need to know for this tutorial:

That said we know what we have to do:

Initialize them in the constructor in the code file:

Now we need to deactivate the auto-search for camera functionality within our pawn when in first person. This will prevent the camera manager from using our third person camera as the point of view there. Remember it will use the first person mesh's location and rotation in that case. We can do this directly in UpdatePawnMeshes before updating the weapon meshes:

At this point if you test the game everything should be working as expected. Everything except a little detail we forgot: remember what the right-click does in first person ? Well it would be great to have at least a part of it functioning in third person too right ? I mean it should at least zoom in/out (change the FOV). Well let's fix that then.

The first part of the code calculates a new FOV (field of view). It does it only if the pawn returns true with IsFirstPerson(). If you still remember IsFirstPerson checks if the player is alive, local and now if he's not in third person (using our flag). Well let's just get rid of the check on our flag so it runs in third person too by checking alive and local manually. Replace:

Do the same to call OnCameraUpdate on the pawn below the call to the base class.

Finally we need to handle the camera update differently for the third person. There we'll only change the FOV of our third person camera while in first person there is a bunch of code that calculates a new relative location and rotation for the fist person mesh, which we don't want.

In the ShooterCharacter header file add two new method declarations that take the same parameters as OnCameraUpdate. This is because they will be called by OnCameraUpdate using a branch on the camera view mode. Add those below TornOff();:

The implementation of UpdateCameraThirdPerson is not very complicated. Remember what the ShooterPlayerCameraManager did with the FOV ? It redefined it's own DefaultFOV value. So that's the one we'll be using for our third person camera. Simply assign the camera's FOV with the DefaultFOV from the camera manager like this:

Done! It should now be fully operational. Wait... I noticed one more strange thingy when playing. Yeah, the muzzle flash is not spawned at the correct location in third person. Well that's right. Again that part is based on mesh visibility but doesn't take the first person state into account directly.

ShooterWeapon.SimulateWeaponFire is the one method in charge for that. A comment has been added to let us know that 2 effects are created because of a potential split screen game. In thate case both players are locally controlled so the shooter will see one effect and the other player will see the other one. Well lets define our possible cases:

That should do it. Now you'll see your muzzle flash coming out of your gun correctly in third person view.

That's it for this tutorial. Of course do not hesitate to let me know if I made any mistakes or if some improvements could be added. I'll gladly reply to you and upgrade this.

As mentioned in the tutorial I am unsure about the replication part of the code. But as it doesn't really fall into the scope of this tutorial I'm not going to dig any further into it. Please feel free to let me know if what I did was incorrect.