In section 5 of the ongoing survival game series we dive into gameplay networking (Replication). If you are not yet familiar with this ongoing project be sure to check out the project overview for information on the series!

Please consider this documentation a reference guide to get additional information on topics covered in the source itself. If you have any questions then feel free to leave your questions & feedback on the section-specific forum thread! 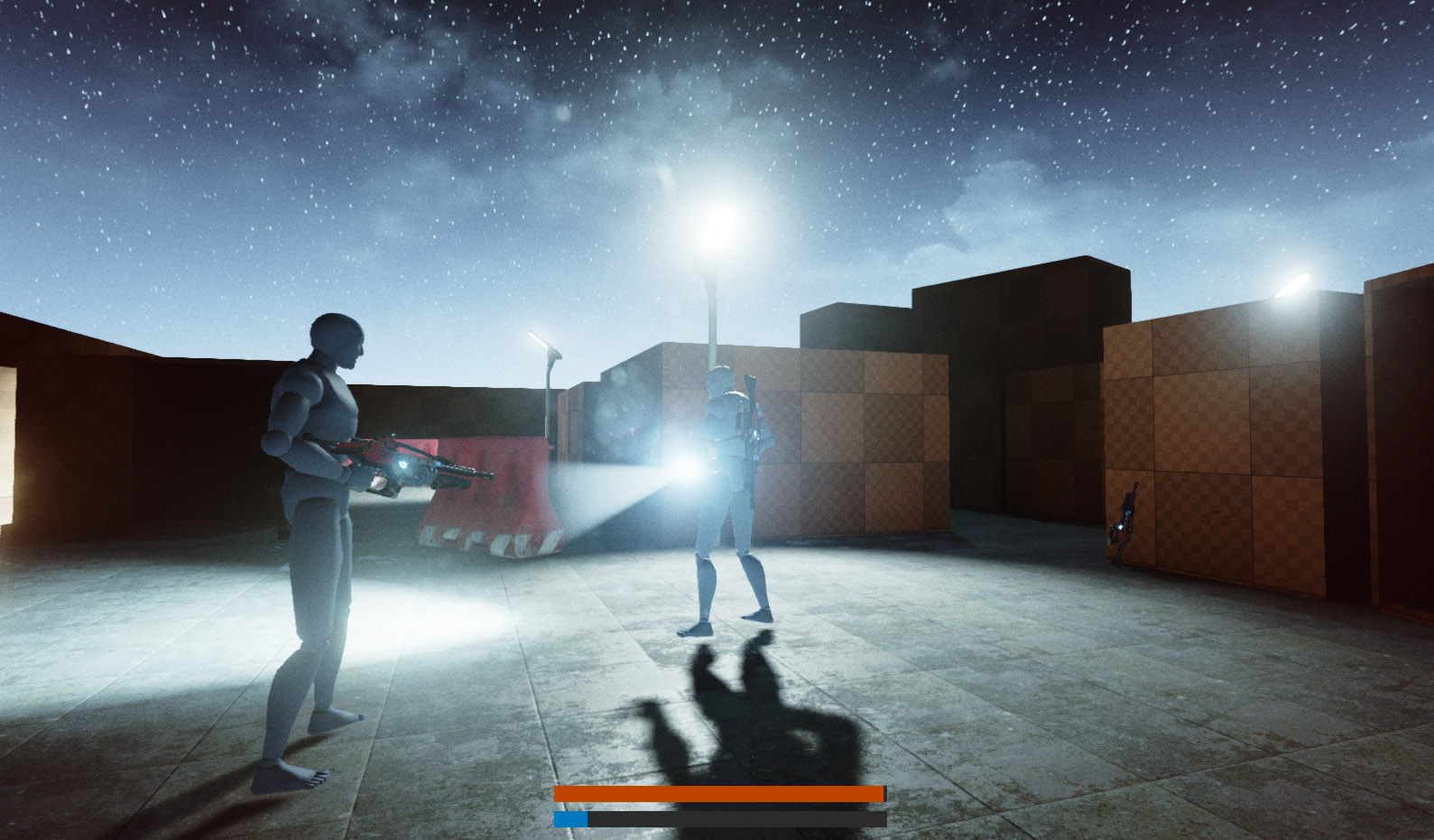 Networking in UE4 is based around the client-server model. This means that there is one server that is authoritative over the game state. All connected clients are kept in close proximity to this state.

Networking in Unreal Engine 4 is referred to as Replication. Therefor a "replicated variable" is one that is kept in sync between client and server where the server maintains and controls the value and the client receives updates to this value to maintain a synchronized state.

The UE4 Docs already have a great deal on Networking & Multiplayer, this page will focus on more practical examples instead covering most commonly used patterns to network a game.

The best way to learn a difficult topic like replication is through practical examples. The entire sample game is networked and uses a variety of common practices used in many multiplayer games. We'll take one example for each of the common patterns (Server-function, Client-function, NetMulticast and Repnotifies) So let's get started with server functions!

To let the player sprint, we need to update the movement speed on the server, since the server is authoritative of the player's position. The issue we need to solve here is that whenever we press the sprint-key (in our case "LeftShift") on the client's machine we need to push this input event to the server to let it know we want to start sprinting.

Any "Server" function must be marked with "WithValidation" in the header (in our case inside SCharacter.h) for security reasons. You generally want to include some conservative validation checks. If this check fails the client disconnects from the server. In this case we simply return true without any additional checks.

As of 4.8 you are required to declare the _Implementation and _Validate functions in the header as well (Make sure you class is updated to GENERATED_BODY() instead of the deprecated GENERATED_UCLASS_BODY() at the top of your header or the compiler will warn about duplicate declarations as pre-4.8 code automatically generated these two functions in the header)

It's recommended to keep the _Implementation functions as simple as possible and simply make a call back to the caller which is SetSprinting().

You may have noticed the "Reliable" keyword. This specifies that we require a guarantee this function to be received at the other end. In real networking situations you will get to deal with packet loss. Information may get lost in transit, if this would happen and this function is set to the alternative "Unreliable" we might end up playing the sprinting animation on the client, but the server has never received the request and is still handling the player as if it is simply walking. For one off calls that update the state to new absolute values, using Reliable is recommended, it does add more strain to the networking however, there is definitely a good reason for using Unreliable whenever you can.

An example of what unreliable would be appropriate for is an update to a vector position, if a packet were lost it wouldn't matter so much if we are continuously sending new positions anyway. Using unreliable in those types of situations is highly recommended as there is no reason to re-send packets on failure, or to wait for a packet to arrive before allowing the next packet to be executed as with "Reliable".

Moving back to the first example the variable bWantsToRun is updated both locally on the client and on the server through SetSprinting(...) and ServerSetSprinting which calls SetSprinting as well. This is because we applied a special Replication Condition to this variable to skip the owner of the variable when replicating. This means all other clients still receive updates to this variable, except the owning client, which has already updated the variable locally to begin with.

A reason for taking this approach to locally updating variables before sending the request is to keep your game responsive when dealing with latency in multiplayer. If your player has to wait for his keypress to change something in-game by routing it through a server it introduces a very noticeable input lag. Players are extremely perceptive to this lag! By immediately updating the variable locally the code to start the sprinting animation can begin immediately and the game will feel more responsive as a result.

Our bomb actor deals damage to nearby Pawns and shows an explosion particle effect when detonated. The application of damage is done on the server-side only, the particle effect however should spawn on all clients. A great way of handling this is by using NetMulticast which sends a RPC request to all connected clients.

The definition of a NetMulticast functions looks like this:

Now every client will see and hear an explosion effect when the bomb is detonated by a player.

Items that can be picked up in the game still persist and re-appear after a while. When picked up, the object remains in place, but will de-activate any visible effect and mesh until it re-appears through a timer. Whenever this state variable changes, we want all clients to respond by either showing or hiding the mesh of the Actor. For this we can use Repnotify, which is a specifier on a variable that binds a function to be called on any change to that variable.

In the implementation of the repnotify function we check the updated value and respond accordingly.

It's important to keep in mind that any change to a repnotify variable only triggers the function on clients and not the server. So whenever this variable changes, we need to manually call the function if we are the server:

Using repnotifies is great for responding to changes in the state of an Actor as we've done in pickup item example above.

Depending on the state of the game mode (or player) we show a different HUD. When the player is dead and waiting to respawn we have a spectator HUD, if the game ended we show a Game Over HUD with the total score. These states are updated and evaluated on the server, however the HUD only exists on the Client-side. One way of handling changes to the HUD from a server is to use Client functions. These functions are only executed on the owning client of an object, in this case whomever owns the HUD. Let's dive into an example of a client function.

Its signature is identical to NetMulticast, using an _Implementation function and without _Validate as used for Server-functions. To keep track of the type of function we are dealing with, it's best to use the "Client"-prefix as is done in the engine code.

This pattern is very useful for performing client side logic that the client did not request itself in the first place like it would with keyboard input events.

By now we've covered 4 common replication concepts using a few practical examples from the project. I definitely recommend studying the documentation pages on Networking and Multiplayer, they will help you in understanding the flow of data when dealing with networking in games.

If you have feedback or questions on this section, feel free to reach out through the forums.

If you're adding networking to your own game, you must specify the UnrealNetwork header in your ProjectName.h (in our case SurvivalGame.h)