SkookumScript's powerful tool suite and command console revolutionize your workflow at any stage of development. You can run code snippets to query and manipulate any UE4 game—even if it is not coded in SkookumScript—as it runs on a desktop, console or mobile device. SkookumScript painlessly scales with teams and content, and adds value to shipped games by facilitating downloadable content, mods, add-ons and patches.

SkookumScript has a C++ API and is fully integrated with Blueprints. SkookumScript methods and co-routines can be placed as custom nodes in Blueprint graphs, and seamlessly integrated into your existing game logic. Blueprints and Blueprint variables are automatically exposed to SkookumScript as classes and data members where they can readily used. The integrated SkookumScript code can be updated, modified and debugged while the game is running on any platform, with instant turnaround.

Battle-tested on major titles such as the open-world hits Sleeping Dogs (Windows, X360, PS3) and Sleeping Dogs: Definitive Edition (Windows, Xbox One, PS4), SkookumScript is lovingly crafted by a team of veteran game developers. We melted our brains so you don't have to!

Teaser video of SkookumScript UE4 Plugin on Vimeo. (We can't embed Vimeo video here, so click on the link to play.)

The SkookumScript Runtime and IDE are available in different versions depending on your needs and scale. The free Standard IDE will significantly enhance the workflow of any UE4 developer and it may be all you will ever need—it is certainly not crippleware! The Professional IDE ($200 per seat) has sophisticated debugging and team features. Check out our pricing for more details. 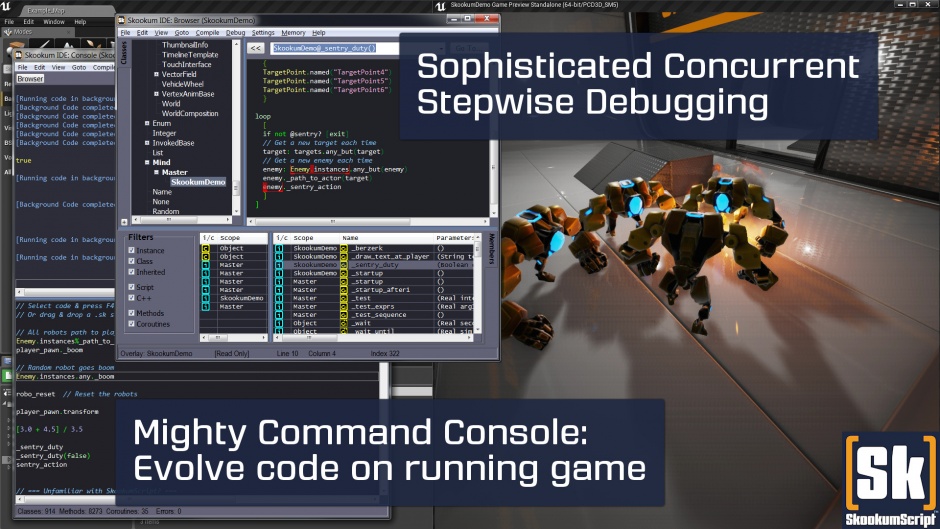 The SkookumScript IDE console and browser in action during debugging.

SkookumScript uses the same C++ meta tagging mechanism as Blueprints to bind more than 5000 Unreal Engine commands, so when a new command is added to Blueprints, SkookumScript gets it automatically. SkookumScript also has powerful game-specific constructs not found in traditional languages, such as native handling of concurrency. 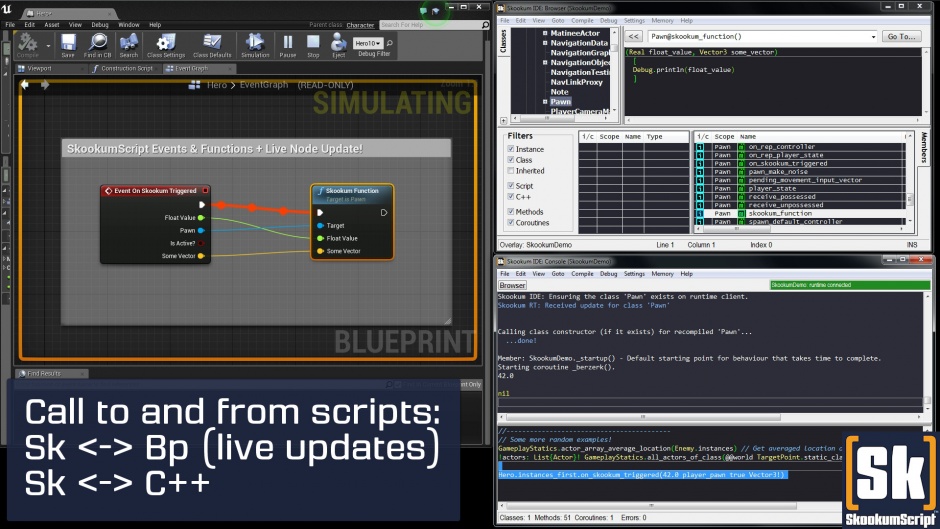 SkookumScript can easily call or be called by Blueprints and C++. Changes to SkookumScript commands are reflected immediately in Blueprint graphs and nodes, and the SkookumScript console allows live interaction with Blueprints while your game is running.
Retrieved from "https://mediawikiv2-website-prod05.ol.epicgames.net/index.php?title=SkookumScript&oldid=847"
Categories: